I started to knit very early in life. At the grand age of six I was wielding those knitting needles, and Tunisian hook like a tiny little savant. I have my extremely patient grandmother, whom I called Ouma, to thank for that. Even though my great-grandmother, Oumie, Ouma’s mother, was a crocheter who was talented beyond imagining, I did not learn to crochet from her, and didn’t learn until I was in my thirties. I applied dogged determination. I was going to learn to crochet if it killed me. My first fiddly attempts did not scare me off. In fact they galvanized my stubbornness.

At first it was excruciatingly difficult. While knitting gave one the idea of tension, it was rather different. Tunisian crochet was a sort of knitting / crochet hybrid, and was a tad helpful. I started to immerse myself in crochet magazines, books, websites, blogs, the whole lot. The one thing I did that was the game changer was crochet every single day. I would challenge myself constantly, and in so doing steadily increased my skillset.

I read a book a while back, when it first came out, called Atomic Habits by James Clear. I recently reread the book, or rather listened to it on Audible. I’ve been mulling it over in my mind for some time, and there are principles that apply to pretty much anything one wants to do, or learn. The book deals with some ideas that I found quite fascinating.

The first of these is the idea of 1% improvements, the rule of marginal gains. You may also see it referred to elsewhere as “microexcellence”. In the book James talks about the British cycling team, and how this theory was applied, and how it moved them from mediocrity to stellar performance. Often we think that focusing on just the big things will lead to the biggest gains, but small and consistent tweaks can make the real difference. The rule, or theory, of marginal gains relies on small but consistent improvement over time. It was Albert Einstein who stated, “Compound interest is the greatest force in the universe”. This applies to effort too.

To put this into practice, let’s talk a bit about crochet (or knitting, etc). When I first started out everything seemed so intensely difficult. I looked at patterns and wondered how on earth I would ever get to that skill level. By my reckoning the only way I would get there is by sticking with it no matter how hard it was. Crochet would have to be a habit that I practiced every single day, so that’s what I did. As I gained skill I kept challenging myself to continuously improve by attempting ever more difficult techniques. It has gotten to a point now where, when paging through a crochet mag, or book, there usually isn’t a pattern I don’t have the skill to take on. It doesn’t mean I know everything. I don’t think any of us could live long enough to know everything about our chosen craft, but by challenging ourselves all the time we can learn a staggering amount.

The next thing James talks about is the “plateau of latent potential”. This is an interesting phenomenon. I think it is best described as where you don’t always notice how far you’ve come, because your improvements are small, but one day you have an epiphany, and realise that you have made incredible progress. You have arrived at a skill level you didn’t think possible. It takes a little time to realise that potential, and it won’t usually happen over a short period. Over the longer term, looking back you will be amazed at how you have mastered your art.

In order to become something you must take on board the identity of what you want to become. You have to consider yourself a crocheter, knitter, weaver, whatever it is. Then you do what crocheters, knitters, weavers, do. The outcome becomes a byproduct of the identity you’ve adopted.

Practicing your fibre art means turning it into a habit. The four laws of habit creation are described in Atomic Habits as follows:

Let’s start with the cue. The cue must be obvious. That’s super important. Place your work where it is easy for you to pick up and work a few rows. The cue will trigger the craving. “Ooooh, I’d love to work a few rows! It’s so relaxing.” The response to the craving must be clear and obvious. Pick up the work and satiate the craving. The reward must be satisfying. I have no doubt that when it comes to fibre arts that the enjoyment, and relaxation, as well as the visible result of your effort, is a huge reward. This habit loop, practiced often, will lead to the consistent effort required for mastery. The reward will make you want to perform the habit over and over again. Making the hobby a habit may sound formulaic, and risks boredom, but it won’t. In order to become really good at anything you need to put in the time so that it feels natural. Mastery is the outcome, but with fibre arts you get the double pleasure of enjoying the journey too.

One of the easy ways to incorporate a new habit into your life is to habit stack. Habit stacking is where you tack on a new habit to an existing habit so that it’s easy to work it into your day. Maybe a few rows with the morning cuppa. That’s twice the enjoyment. What a pleasure.

To become really, really good at anything requires hard work, and consistency. With fibre arts mostly being skills-based, it is essential that the movements become as natural as breathing. The only way that is going to happen is if you do it every single day. I often tell those I have taught to crochet that it’s fine if they don’t have a lot of time to practice. Fifteen minutes a day is enough. Consistency is critical. I cannot emphasise this enough. Do as much as you have time for, but make sure you make it a habit. This may sound like it would take away from the pleasure, but on the contrary. By mastering the movements and skills required, you will take your journey to places you couldn’t have imagined. One day you will be quietly sitting with a cup of coffee (or whatever beverage pleases you), and you will realise you’re not a beginner anymore. You are very, very good. 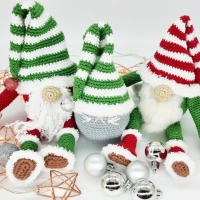 It's live, and it's free! My Gilby the Christmas Gonk pattern is available on Ravelry here: https://www.ravelry.com/patterns/library/gilby-the-christmas-gonk
I am so happy to tell you that Jaarn Magazine Issue Five is out! Get your copy at www.jaarn.co.za @hookybren does an amazing job with each issue, and the models can't but look gorgeous in all the fab creations. There's something for everyone, whether you knit or crochet.
Gilby the Gonk has a companion. Freya the Cranky Christmas Cat will be released with the Gilby pattern this week. Look out for it.
Aiko Alpaca. Pattern currently in testing phase. Made with @nurturingfibres Eco-Cotton and @scheepjes Softy. Her ceremonial dress (not pictured) is Eco-Fusion. Can't wait to share her with you.
Fell in the shower and did a superb job of hurting myself. These "feel better" flowers from a very dear friend perked me right up.
Gilby the Christmas Gonk has been completed and will be available as a free download in my Ravelry shop and blog first week of December. I'll get all the details to you soon as it's live. I hope he brings as much joy to you as making him did to me.